We can thank a group of industrialists, financiers and traders whose determination to bring economic prosperity to a post-World War I era eventually led to the founding of the ICC. With no global system of rules to govern trade, it was these businessmen who saw the opportunity to create an industry standard that would become known as the Incoterms® rules.

After ICC’s creation in 1919, one of its first initiatives was to facilitate international trade. In the early 1920’s the world business organization set out to understand the commercial trade terms used by merchants. This was done through a study that was limited to six commonly used terms in just 13 countries. The findings were published in 1923, highlighting disparities in interpretation.

To examine the discrepancies identified in the initial survey, a second study was carried out. This time, the scope was expanded to the interpretation of trade terms used in more than 30 countries.

Based on the findings of the studies, the first version of the Incoterms® rules was published. The terms included FAS, FOB, C&F, CIF, Ex Ship and Ex Quay.

1953: Rise of transportation by rail

ICC launched the third revision of the Incoterms® rules, which dealt with misinterpretations of the previous version. Two trade terms were added to address delivery at frontier (DAF) and delivery at destination (DDP).

The increased use of air transportation gave cause for another version of the popular trade terms. This edition included the new term FOB Airport (Free on Board Airport). This rule aimed to allay confusion around the term FOB (Free on Board) by signifying the exact “vessel” used.

With the expansion of carriage of goods in containers and new documentation processes, came the need for another revision. This edition introduced the trade term FRC (Free Carrier…Named at Point), which provided for goods not actually received by the ship’s side but at a reception point on shore, such as a container yard.

The fifth revision simplified the Free Carrier term by deleting rules for specific modes of transport (i.e., FOR; Free on Rail, FOT; Free on Truck, and FOB Airport; Free on Board Airport). It was considered sufficient to use the general term FCA (Free Carrier…at Named Point) instead. Other provisions accounted for increased use of electronic messages.

The “License, Authorizations and Formalities” section of FAS and DEQ Incoterms® rules were modified to comply with the way most customs authorities address the issues of exporter and importer of record.

2010: Reflections on the contemporary trade landscape

Incoterms® 2010 is the most current edition of the rules to date. This version consolidated the D-family of rules, removing DAF (Delivered at Frontier), DES (Delivered Ex Ship), DEQ (Delivered Ex Quay) and DDU (Delivered Duty Unpaid) and adding DAT (Delivered at Terminal) and DAP (Delivered at Place). Other modifications included an increased obligation for buyer and seller to cooperate on information sharing and changes to accommodate “string sales.”

To keep pace with the ever-evolving global trade landscape, the latest update to the trade terms is currently in progress and is set to be unveiled in 2020. The Incoterms® 2020 Drafting Group includes lawyers, traders and company representatives from around the world. The overall process will take two years as practical input on what works and what could possibly be improved will be collected from a range of Incoterms® rules users worldwide and studied. 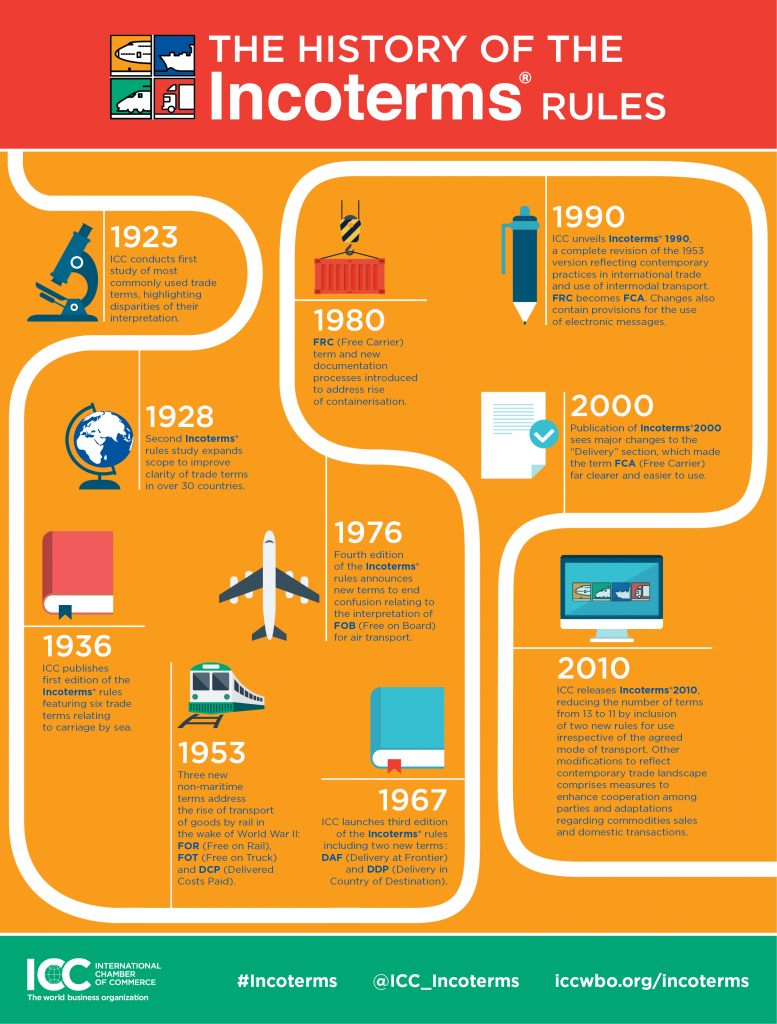